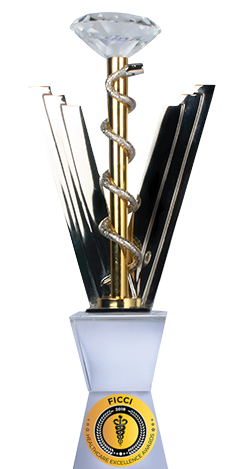 The FICCI Healthcare Excellence Awards was conceptualised in 2009, with an aim to felicitate organizations and individuals for their contributions to the industry by innovating for increased efficiency, affordability and improved performance of healthcare delivery at large. The FICCI Awards have emerged as the definitive recognition for contribution to healthcare in the country over the years based on Innovation, Impact and Sustainability & Scalability which forms the three criterias for evaluation.

Indian Healthcare industry is growing at a tremendous pace owing to its strengthening coverage, services and increasing expenditure by public as well a private players, however, there is no dearth of challenges as India lags the world averages in key health indicators, health infrastructure and manpower compared to the developed world, and hence organizations who through their innovative solutions are able to address these challenges, should be recognized and encouraged.

Excellence in Scaling-up of Manufacturing for COVID demand

To recognize the organizations which have increased indigenous manufacturing to meet the COVID demand.

Excellence in Hospital Preparedness for COVID-19

To recognize the organizations which have increased/modified the facility, infrastructure, process, diagnostic center, supply chain, etc. to meet the demand of the current situation .

Open to all Hospitals, Diagnostic Centre, Blood Bank and Other Healthcare Service Providers*

To recognize the organization which have taken initiatives to provide home healthcare services to patients so they get their treatment inside their home .

Open to all Hospital and Other Healthcare Service Providers*

To recognize the organization which have taken initiatives to provide tele-consultation to their patients without exposing their staff and patients to virus .

Open to all Hospitals and Other Healthcare Service Providers*

Any equipment, device or technology intended to use for medical purpose which healthcare providers to diagnose and treat patients to result in better healthcare in India. The technology must have been manufactured/adopted for commercial use after all regulatory clearances .

To recognize organization which has developed an innovative medical software/ app for the healthcare sector in India to enable professionals to efficiently manage patients or spread awareness to people about COVID .

To recognize the initiatives taken by organization and employees to obtain, improve and retain the skills, knowledge tools, equipment and other resources required to treat the patients .

To recognize the social initiatives which have resulted in the upliftment of the healthcare status in India. The initiative should have wider impact on the preventive/ therapeutic and outcome-based healthcare scenario .

Recognition for projects and initiatives taken to prevent harm to patients and have measurable impact in improving the patient care.

Number of Winners : 4
(One for Hospitals, One from Other Healthcare Service Providers, One from Diagnostic Centre and one for Nursing Led Projects)

Any equipment, device or technology which has resulted in better healthcare in India. The technology must have been manufactured/adopted for commercial use after all regulatory clearances.

Recognition for organization who play a role in managing and promoting their environmental responsibility by reducing the harmful impact on the environment by the healthcare industry.

Open to all hospitals, Med-Tech Companies & other healthcare organizations

Recognition of unique health insurance products which addresses the need of the Indian Market. There should be measurable impact thorough the use of innovative technologies/processes in enhancing the distribution channels of the product, as well as creating more awareness and penetration through various marketing efforts.

Any equipment, device or technology intended to use for medical purpose which healthcare providers to diagnose and treat patients to result in better healthcare in India. The technology must have been manufactured/adopted for commercial use after all regulatory clearances.

To recognize the initiatives taken by organization and employees to obtain, improve and retain the skills, knowledge tools, equipment and other resources required to treat the patients

To recognize the social initiatives which have resulted in the upliftment of the healthcare status in India. The initiative should have wider impact on the preventive/ therapeutic and outcomebased healthcare scenario

Recognition of innovation and excellence at point of sale/point of care services in health insurance that have resulted in enhanced experience of the consumers and other stakeholders.

Dr. S.Y.Quraishi assumed charge as the 17th Chief Election Commissioner of India on 30th July 2010. Dr. Quraishi earlier held the position of Election Commissioner since 30thJune 2006. He has been already involved, as part of the three member Commission, with control, direction and superintendence of the conduct of elections to the offices of President and Vice-President of India, General Elections to the Lok Sabha – 2009, besides elections in a large number of states. In the management of elections, Dr. Quraishi has brought a special focus on people’s participation, voters’ education and youth involvement in the electoral process through scientific research and interventions. He has been an ardent proponent for lending strength to the grassroots level election functionaries.

Born on 11 June 1947, Dr. S.Y. Quraishi completed his Masters degrees from St. Stephen’s College in Delhi before joining the Indian Administrative Service in 1971. He earned distinction for his study of several languages. Dr. Quraishi received a Ph. D for his thesis on “Role of Communication and Social Marketing in Development of Women and Children”.

Dr Quraishi brought to the Election Commission 35 years of distinguished work in the civil service, at both federal and state levels. Prior to his joining the Commission, he was Secretary, Ministry of Youth Affairs and Sports, Govt. of India.

Dr Quraishi is known for his special contributions in social sector reforms covering health, education, population, drug abuse, and civil society action. He has done extensive work in the fields of Gender, Women & Child Development, HIV/AIDS, Youth and Adolescent issues. UN and other international organizations have availed his expertise in these areas as consultant and resource person on several occasions.

As Director General, Doordarshan (National Television Network), Dr. S Y Quraishi brought about a turnaround in the programmes and finances of the organisation through introduction of new methods and approaches.

Dr. S Y Quraishi is also a known name in power sector reforms. As Secretary of the Department of Power and Non-Conventional Energy, in Haryana, he successfully negotiated a $600 million World Bank loan for reform and privatisation of power sector in the State. This initiative was evaluated as one of the ten best in the world by the World Bank Quality Assurance Team. He also served as Secretary, Irrigation in Haryana. As Additional Secretary for Ministries of Renewable Energy and also of Steel in GOI, Dr. Quraishi piloted wide ranging reforms.

Dr. Quraishi has a number of books, articles and talks to his credit on issues related to democracy, elections, HIV AIDS and Family Planning, social marketing, women and child development and Youth. His book ‘Social Marketing for Social Change’ has broken new ground in the field of Development Communication.

Dr. Quraishi has received several prestigious awards in recognition of his contribution to civil society and human development issues. Among these are, the Nehru Fellow for innovative and outstanding work in child welfare, Secular India Harmony Award for contribution to human understanding, Silver Elephant National Award of Indian Scouts and Guides in recognition of service of most exceptional character to the movement, Shiromani Award for merit, high calibre and commitment to National Progress and Human Welfare.

Dr. Quraishi has widely travelled across India and the globe. He headed Indian delegations at a large number of international conferences and discussions. He is an avid musician and spends most of his leisure time among people and friends with musical interests.

Dr S.Y. Quraishi assumed charge of the Chief Election Commissioner of India on 30th July 2010. He relinquished the charge of CEC on 10th June 2012

Professor Tehemton Erach Udwadia is an alumni of St. Mary’s High School, Wilson College, and Seth G.S. Medical College, Bombay, graduating from the University of Bombay in 1956 and did his post-graduation from the University of Bombay and the Royal Colleges of Surgeons of England and Edinburgh. Joined the Surgical Staff of the Grant Medical College & J.J. Hospital, Mumbai in 1963. He retired as Honorary Professor of Surgery in 1994 and is now Emeritus Professor of Surgery, Grant Medical College & J.J. Hospital, Mumbai.

A forceful, innovative and renowned teacher and surgeon, he was the first surgeon in India to start laparoscopy in surgery in 1972, and the first to perform laparoscopic surgery in the developing world in early 1990. With missionary zeal Professor Udwadia has conducted workshops all over India and in Nepal, Mexico, Brazil, China, Myanmar, Bangla Desh, and other developing countries spreading the gospel of laparoscopic and Minimal Access Surgery. He has put all his efforts into realizing his belief that the benefits of surgical advance should be made available to all people, in all places, irrespective of their socio-economic status. His innumerable research papers and presentations over fifty years cover a wide field of surgery - from myocardial revascularisation (his PhD topic) to research in abdominal tuberculosis, ascites, hydrocephalus, peritonitis, flexible endoscopy and diagnostic and therapeutic laparoscopy.

Over the last three years Professor Udwadia as Chairman of ‘Center of Excellence for Minimal Access Surgery Training’ (CEMAST), has laid the foundation of a state of the art Minimal Access Surgery training Center, comparable to the best in the World, giving training to surgeons from all over the subcontinent in every surgical speciality of MAS. To date over 2000 surgeons have been trained in MAS at this Center.